A TREASURE chest filled with $1million worth of gold and jewels has been found after a decade-long search that killed at least five adventurers.

Forrest Fenn, the man who created the treasure hunt, revealed on Sunday that a fortune seeker has finally uncovered the chest in the Rocky Mountains.

The 89-year-old, art dealer, hid the chest ten years ago and included clues to its whereabouts in a poem included his 2010 autobiography the The Thrill of the Chase.

Thousands of people have searched for the hidden loot – and at least five people have died while trying to find it.

Mr Fenn confirmed in a statement on his website that the treasure chest had been discovered somewhere in the wilderness.

He did not confirm the name of the lucky treasure hunter, or the chest’s exact location. 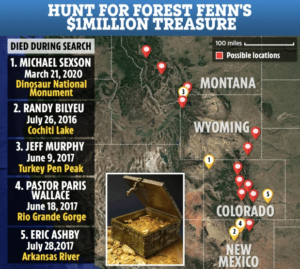 The adventurer had sent Mr Fenn a photograph revealing his discovery but does not want his name released.

Mr Fenn, who ran an art gallery in Santa Fe for 17 years, said: “It was under a canopy of stars in the lush, forested vegetation of the Rocky Mountains and had not moved from the spot where I hid it more than 10 years ago.

“I do not know the person who found it, but the poem in my book led him to the precise spot.”

The chest was located somewhere in the wilderness in Montana, Wymoing, Colorado or New Mexico.

It was bronze and packed with gold coins, gold nuggets, ancient Chinese jade carvings, and antique jewelry with emeralds and rubies.

The chest itself weighed 20lbs, while its valuable contents weighed  another 22lbs.

Mr Fenn hid the chest because he wanted to start a good old fashioned treasure hunt that would encourage people to get outside into nature and to give people hope.

Internet forums and YouTube channels – such as the one run by treasure hunter Toby Younis – have sprung up dedicated to Fenn fortune as the people turned Indiana Jones to solve the mystery.

Mr Fenn said: “I congratulate the thousands of people who participated in the search and hope they will continue to be drawn by the promise of other discoveries.”

Asked how he felt about the treasure being found

He wrote the poem in his autobiography that included key cryptic hints about the treasure’s location.

READ ALSO | SHOCKING : A Mum Dream Home in Isle of Sheppey fell off a cliff overnight

It made reference to “warm waters halt”, “the blaze” and “canyon down” – along with other clues that had treasure hunters racking their brains.

He has also given a few hints over the years, saying it was more than eight miles north of Santa Fe and was above an elevation of 5,000 feet.

Mr Fenn said he delivered the chest to its secret location in two separate trips.

The most recent death to hit the search was in March, when Michael Sexson, 53, was found dead in the wilderness.

Malaria Parasite; Why It’s So Hard to Curb

[…] Dave Chappelle response to Don Lemon‘s call for celebs to speak out on the death of George Floyd in a big way … took the CNN anchor as a surprise but he was able to get the message and conform gently. […]