Arnold Schwarzenegger is the most accomplished bodybuilder in the history of the sport, his gym — Gold’s in Venice — is considered the mecca of bodybuilding …He rolled up to the gym but refused to go inside.

Arnold Schwarzenegger recently bicycled to Gold’s Tuesday morning for a workout, now that the gym’s back in business. He’s there like clockwork when it’s open, so Tuesday marked a big day for him. 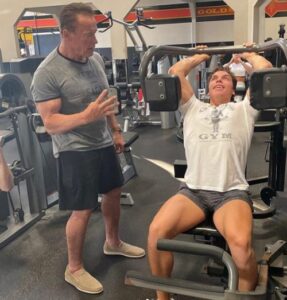 Gold’s is complying with the law — State regulations do not require people wearing masks when they lift, but Arnold’s way more concerned about safety — when people moan, grunt and handle the same weights, it’s risky.

The 72-year-old is an Austrian-American actor, filmmaker, businessman, author, and former politician and professional bodybuilder.

Reports have it that he will stay clear of Gold’s until people start wearing masks on the floor — or when there’s a vaccine.

It is officially know that he owns a gym at home.