Bernie Ecclestone, former chief executive of the Formula One Group made an offensive statement by pushing a narrative that Black people are more racist than whites.

His recent quotes reads — “In lots of cases, Black people are more racist than what White people are.”

Ecclestone praised Hamilton saying he’s “very, very, very talented as a driver and he seems to be now extremely talented when’s he standing up and can make speeches.” — He started out nice.

“This last campaign he’s doing for Black people is wonderful.”

But, when Ecclestone was asked about Lewis’ new endeavor — The Hamilton Project (created to help promote diversity in racing) … He sounded abnormal.

“I don’t think [The Hamilton Project] is going to do anything bad or good for Formula One.”

“It’ll just make people think which is more important. I think that’s the same for everybody. People ought to think a little bit and think: ‘Well, what the hell? Somebody’s not the same as White people and Black people should think the same about White people.'”

He followed continued — “In lots of cases, Black people are more racist than what White people are.”

When CNN pushed for specific examples, Ecclestone didn’t proof any concrete evidence — explaining it’s something he’s “noticed” over the years.

When was the last time a white driver was racially taunted at a race?

It happened to Lewis Hamilton in 2008 and 2009 — when a bunch of racists put on blackface to taunt Lewis at the Spanish Grand Prix wearing shirts that read, “Hamilton’s Family.” 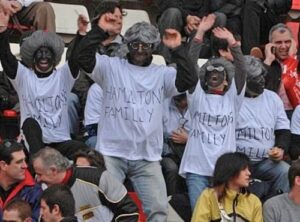 There is no shortage of example.. hope you get the point.

Ecclestone has said a bunch of terrible stuff over the years. he famously praised  Adolf Hitler in 2009 for being “able to get things done.”– TMZ reports.

He also publicly supported Vladimir Putin‘s anti-gay policies and also sprinkled in some sexism … saying women should dress in white “like all other domestic appliances.”

READ ALSO | Bikini Hero : A Nude Sunbather saves a Family of Three from Drowning in a Riptide in Pedn Vounder