Brain wrapped in an aluminum foil is not something you see everyday… but a discovery happened in the shores of Lake Michigan.

Finding a message in a bottle on the beach is one thing, but this guy found a brain washed ashore.

The discovery happened on Tuesday morning in Wisconsin when a beachcomber out for his daily stroll came across a square package of aluminum foil, held together by a pink rubber band.’ 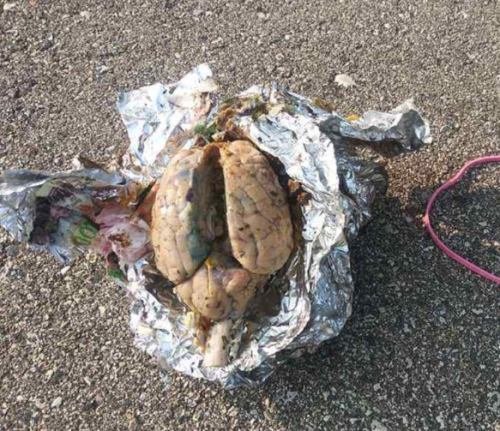 Jimmy Senda in his own words said ”curiosity got the best of me, so I opened the package and beheld a brain”.

At first, Jimmy says his own brain didn’t even register what he just found … and then after a few moments he realized he wasn’t holding a chicken breast — as he initially thought.

He called the police to investigate, and the Racine County Medical Examiner says… the brain is NOT human.

The examiners said its from  a cat.

Jimmy is definitely a hardcore, we sure know it will probably stink…