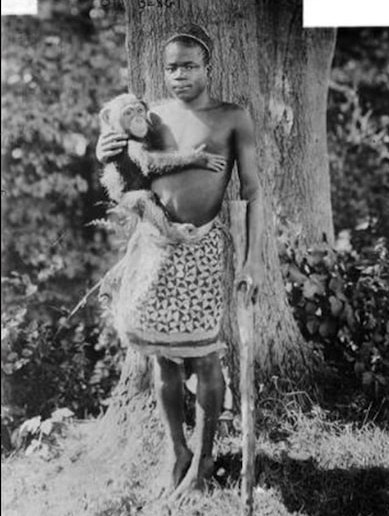 Bronx Zoo is apologizing for its horrific treatment of a Central African man, Ota Benga, who was  on display in the zoo’s monkey house … with an orangutan.

The Wildlife Conservation Society — the organization that runs the zoo — is formally apologizing for the 1906 imprisonment and caged display of Benga for one week.

The apology was clearly prompted by the social activism since George Floyd’s murder, and the Wildlife Conservation Society…

“We recognize that undisguised and systemic racism persists, and our institution must play a greater role to confront it.”

In the Year 1904 Ota Benga, a young African boy, was kidnapped from Congo and taken to the United States of America.

On arrival, he was put in a zoo with monkeys and was displayed together with them.

By 1906, he had become popular among the white folk who go to watch him.  On the 9th of September 1906, the New York Times published an article about a young African man, who was put on display in the monkey house in Bronx New York’s largest zoo.

The article referred to him as “a so-called “pygmy”, and they used the headline “Bushman Shares a Cage with Bronx Park Apes”.

The paper reported that over 500 white folks had gathered that day with their children to laugh and jeer at Benga.

Reports say that he was 23 years, but still had the body of a boy.

REASON BEHIND THE BRONX ZOO APOLOGY

Reverend James Gordon  and others confronted the zookeepers, “We are frank enough to say we do not like this exhibition of one of our own races with the monkeys.

Our race, we think, is depressed enough, without exhibiting one of us with apes. We think we are worthy of being considered human beings, with souls.”

But nothing the ministers said was important to the zoo authorities. The zoo director and curator, William Temple Hornaday defended their actions bravely, claiming that it was done on the ground of science.

Hornday said that “I am giving the exhibition purely as an ethnological exhibit.

He stubbornly insisted that their dehumanization of Benga was in keeping with the practice of “human exhibitions” of Africans in Europe.

Hornaday was unrepentant. He declared that the exhibition would continue until the Zoological society asked him to stop.

He knew he had the backing of the Zoological Society and many highly placed government officials, so there was no way they would ask him to stop.

At the time, he was a close friend to the President, Theodore Roosevelt.

Later on Benga started to resist and threaten zoo attendants, and was only released after a delegation of local black churches lead by Reverend James Gordon demanded it.

When he was finally freed, Reverend James Gordon took him in at his Brooklyn orphanage … but Benga died by suicide 10 years later.