Failure The Steering Wheel to Success

In life it doesn’t matter how many times we fail.

Too many attempts can lead to one massive success, which can heal the pains of  failure. 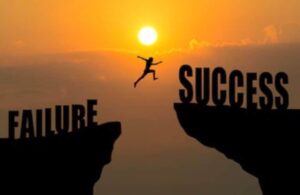 massive success of creating an Incandescent electric light bulb, which we all use today.

Just one more attempt immortalized him in pictures and made his  name stand the test of time.

Even though he wasn’t the first to start the invention of a Light Bulb, but his extraordinarily

positive perception of life was the key to this great invention.

of this revolutionary technology. Many other notable figures like Italian inventor Alessandro Volta, 1800,

in 1848, Englishman William Staite improved the longevity of conventional arc lamps by developing

a clockwork mechanism that regulated the movement of the lamps’ quick-to-erode carbon rods.

Edison realized that the problem with Swan’s design was the filament. A thin filament with

to make it glow. He demonstrated his light bulb in December 1879.

Edison was given the credit because he resisted every doubt of failing and even, bought patent and

joined forces with Swan, and other in order to perfect the innovation.

if he gave up like the earlier inventors, he wouldn’t have that much credit as he had till date.

Failure is not the end but the beginning of something new, something amazing, something great.

When old flowers fade new ones sprout out and they are even more beautiful and shine brighter,

than the faded ones. When one door closes many other open, because ‘NO’ means Next Opportunity,

If a baby don’t crawl, he or she can’t walk, and when he or she starts walking, he or she has to

fall a few times to learn how to stand firm or hold onto something to avoid falling again.

life is process with different steps at different levels.

Growth is a gradual process, without the struggle their won’t be growth, because nothing grows in

about happiness all the time” the wise think about sorrow, because every living must die.

Failure gives us a new purpose, a fresh platform to make amends. Failure purges the mind and brings

about critical thinking and deep reasoning. Failure is the most important part of success cause its lessons

springs forth knowledge and understanding.

”When you fail don’t quit, instead make out time to rest, purge your mind and continue”

don’t ever quit, because their is no end to what you can achieve if you keep trying, there is always

patient and persistent, stay un-defeated, conquer, because greatness is not measured by the amount

of success you have achieved but by trials and tribulations, of sorrow, of pain and obstacles you have

endured. ”Their is no smoke without fire”, one has to go through the furnace of humiliation,

sorrow and pain before they can achieve greatness. Every greatness has a story of its ups and down

and its never an easy one because the beginning is always the hardest, there is no shortcut to

greatness only lessons and eternal success.

Gold and silver is tested in fire this makes it shatterproof. Greatness\Success is a test of courage,

without challenges there won’t be any upgrade, don’t fear failing instead embrace it and be proud of it,

because its through failure that we succeed, its through criticism that we become better.

Success is good when its internal but if its not worked hard for, it would give the Winner a sense

of relaxation thereby slowing them from the greater task ahead, this causes limitation and laziness

which leads to more failure.

Their is no limitation for a failed project, every minute, seconds, hour and day counts and the focus

is to get better. Failing is a training for a resilient mind,  The secret of winning is in trying.

People think of death as failure but without death their can’t be birth , if  hunger don’t exist,

humans won’t work in order to put food on the table, if there is no lack then their won’t be need,

without sickness then you can’t appreciate life and good health, without poverty then you won’t

appreciate being rich. For life to be at Equilibrium two things are involved, its either black or white,

evil or good, fail or succeed, but all this works together so that destiny can be fulfilled. If its too straight

then it won’t have any meaning added to it, there is no way we can cheat the forces of nature,

life works both ways, you can’t find two evil in court, one would be corrupt and other good.

makes us a failure”

opportunities for an active mind, there is no way you acquire new knowledge if you don’t fail at

the old ones, to me Success is weakness cause nothing new is learnt when there is no challenge.

To succeed then there should be failure because failing is motivation, and a room for new

opportunities for a persistent scholar. failure builds us both mentally, spiritually, physically

and it makes our vision get more clearer and more deeper, so when there is success we won’t

relax because we have been trained and went through the furnace of failure.

Be inspired and stop allowing a little failure to make you give up , instead see it as a beginning

of something new and much better than the old.

Remember these that in the eyes of Men, Jesus Christ they said have failed because He died on the

Cross of Calvary but what they didn’t figure out know is that His death brought us Forgiveness, a way out of

these life, His death brought us grace, His death united us with God so that through Him we can

become the righteousness of God. In His death He achieved greatness, in His death he broke the

power of death, His death brought Him honor and made His name greater than any other name.

This immortalized Him in the minds of generations to come, in His Failure He found Victory and

owned the key to life and death . With this knowledge and understanding, we agree that There is

no success without failure.

Wisdom From Above – Article

The Logic In Greatness – Theories

The Word We Speak Determines Our Destiny

There Is Pain In Every Joy | Essay

Fear Is Not Real

Self Motivation is the Key to Success- ARTICLE