Kenny Sansom Arsenal legend battered by alcohol, which led him to fall and seriously injure his head.

The ex-England star, 61 years old,  has battled with alcohol problems in the past. Kenny has been unable to help the police with their enquiries while having treatment in the Royal Devon and Exeter Hospital, Mail Online reports.

His family are said to be keeping a close eye right by his bedside.

Kenny has suffered a series of health problems linked to his battle for alcohol since retiring from football in the 1990s.

The footballer was left homeless at one stage and got divorced. He also suffered from depression and suicidal thoughts.

The legend won 86 cups for England and was the most-capped left-back until Ashley Cole in the early 2000s. 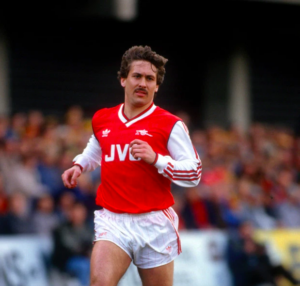 A statement revealed on his twitter says “Kenny is currently ill in hospital. He is being well cared for and does not have COVID-19.

Kenny is currently ill in hospital. He is being well cared for and does not have COVID-19. Kenny’s family and close friends kindly ask the media to respect his and their privacy, plus that of the healthcare workers treating Kenny.

2 thoughts on “Kenny Sansom Arsenal legend battered by alcohol: Fighting for Life in a Hospital”