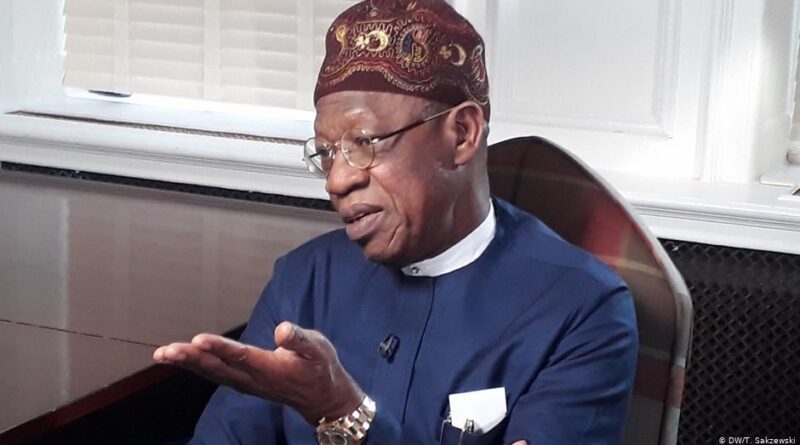 Notwithstanding video evidence to the contrary, the Minister of Information and Culture, Lai Mohammed, has denied announcing an increment in the fine for hate speech from N500, 000 to N5m.

Lai Mohammed, who on August 5, 2020, announced the decision of the National Broadcasting Commission to increase the fine for hate speech stated on oath that he did not do so.

The minister said this in a counter-affidavit in response to an originating motion filed before a Federal High Court in Lagos, by human rights lawyer, Inibehe Effiong.

Effiong is challenging the imposition of N5m fine on Nigeria Info 99.3FM Lagos and the threat by the National Broadcasting Commission to punish other broadcast stations in the country over alleged hate speech.

In an affidavit deposed to by a Litigation Secretary at the Federal Ministry of Information and Culture, Sunday Ojobo, the minister stated that he never announced the fine.

The affidavit further read, “Paragraph 19 is denied. The 2nd defendant (Mohammed) did not announce an increment in any fine for hate speech from N500,000 to N5,000,000 or any other because there is a governmental body or institution mandated to regulate and enforce the Nigerian Broadcasting Code.”

The minister further stated that the constitution allows for human rights to be suspended for the sake of national interest.

He wrote, “The Constitution of the Federal Republic of Nigeria provides for derogation from fundamental rights in the interest of public safety, public order and for the purpose of protecting the rights and freedom of other persons.”

Mohammed further stated that the NBC Act gives the commission the power to sanction stations that contravene its code.

The minister also argued that Effiong was not directly affected by the NBC sanctions and therefore lacked the legal right to challenge NBC’s Code.

He further said, “The 1st respondent (NBC) has powers in determining and applying sanctions including revocation of licences of defaulting stations which do not operate in accordance with the broadcast code and in the public interest.

“A public affairs commentator, anchor of programmes and the media are not to use their platform to incite public violence or disorder or in a manner detrimental to the national interest.

“It is within the purview of the Federal Government of Nigeria to maintain public safety, public order in the interest of all citizens of Nigeria to avoid breakdown of law and order.”

In its response to the suit, NBC insisted that it had the right to sanction errant stations.

In an affidavit deposed to by a litigation clerk, Kabir Fabode, from Adeola Adewara and Co, the commission stated that the applicant was not a broadcaster and therefore lacked the right to challenge its actions.