Model Emily Sears — who is seen in some of saucy Carl’s Jr. ads — is recovering from successful brain surgery … and looking forward to getting her life back after a major health scare.

Model Emily Sears revealed she underwent a craniotomy last week in order for surgeons to remove a cavernoma, a cluster of abnormal blood vessels that was irritating her brain tissue and causing seizures.

The model says she was in a store in Los Angeles back in April 2019 when she had her first seizure and collapsed, which led to her diagnosis.

Despite trying several medications to deal with the issue, she had at least 5 more seizures before suffering a bad fall near the end of the year …

That is when she decided to schedule brain surgery to remove the cluster.

Unfortunately, the coronavirus pandemic delayed her procedure, but she was finally able to have it done last week … and it was an extremely intricate process TMZ reports. 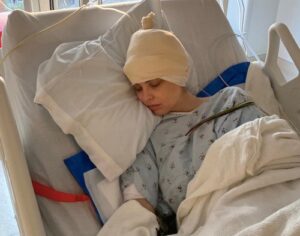 Emily’s surgery took more than 5 hours because the cavernoma was against the speech area of her brain … so doctors had to wake her up in the middle of it to test her speech with flashcards, to make sure they didn’t remove any vital tissue.

Joyfully, Emily says the surgery was a success — the whole cluster was removed — and she’s happy and healing and eager to return to normal living.

Naya Riveras Dead Body Was Found in The Northeast Part of Lake Piru: No Sign of Foul Play