DRAGON BLOOD TREE THAT MANY FOLK TALES DEEM AS POSSESSED BY EVIL SPIRIT AND DEMONS SOLVED.

Myth has it that any tree that bleeds  in ”Nigeria” precisely when cut is possessed by some evil spirit and demons, most states/ neighborhood had this gigantic tree that bleed when cut.

A lady on Instagram (@leoneandmummy) narrated a short interesting story of her childhood of this kind of “Tree.

She narrated — ” It served as shade when the sun was at its hottest while we played with other neighborhood kids.

No one really knew how old the tree was but it was obviously really old and intimidating and it served as a very good landmark in the area as it could be spotted from quite a distance.

All was well and jolly until a “Pastor” decided to rent and convert an empty building into a “Church” just a few meters away from the tree.

The church began spreading tales about the tree being evil & being responsible for some misfortune that befell some neighbors in the area.

Led by their “Pastor” they began to gather round the tree almost every week and even at night to “Pray”, yell and scream at the tree (some sort of exorcism s***) This “mystery show” lasted for a few months and was quite funny to me even as a kid then.

Eventually they got permission to cut down the tree and it bled a-lot while being cut. 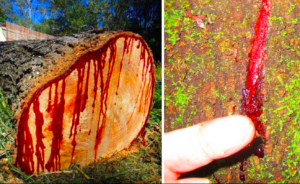 The bleeding of the tree further strengthened their belief that it was indeed evil & cursed, because they couldn’t understand why a tree would have what looked like blood inside it, most of the neighborhood agreed with them.

I have also heard tales of a tree in my childhood, very old that some Men of God deem was the cause of death of people in my locality back then in Ogwuagor Abakpa Nike Enugu, the tree as they say kill people every year, and the families in the locality resort that cutting the tree would stop the said death.

In Native Nigerian Culture most traditionalist worship trees they call (chi) they even go as far as killing life animals and pouring the blood and alcohol on it, all in the name of sacrifice. 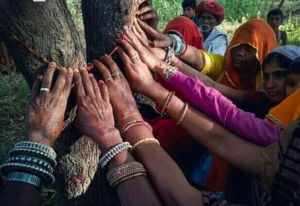 There aim is for protection, wealth, Fertility, guidance, witchcraft and knowledge of #herbal medicine.

Most of these tree worshippers are born into it– craftsmen carve out image of idols from trees, that they worship and call it there savior. 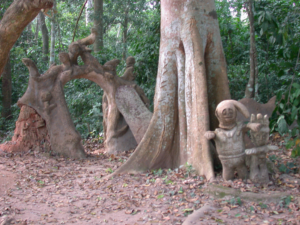 1. Dragon blood tree looks like giant mushroom,  thanks to its single trunk and umbrella-shaped crown. This plant usually grows to the height of 32 feet.

2. Leaf of  the tree are used as a source of food for goat during the periods of drought.

3. Injured bark and branches release red resin, and the resin is used in treatment of diarrhea, superficial wounds, bleeding, ulcers, dysentery and fever.

4. Resin of dragon blood tree is used as varnish for the violins. It is also frequently used as a toothpaste, lipstick, glue for the pottery and as a source of red pigment for dyeing of wool.

5. Resin of dragon blood tree is often used as incense and can be used for magical rituals.

7. Dragon blood tree can survive for hundreds of year under most favorable conditions.

Naturally tree or idol has zero supernatural power to do things, but devotion and sacrifices of human to these trees deposit power into them.

Human’s are small god, the mysterious operation by these said tree are the spirit of dead people that have been invoked inside the tree and the spirit of the worshipper.

What you bow down to, pour blood or alcohol on, absorbs your own power, and works with it– some even go as far as killing animals and human being and spreading the blood on the tree.

They tend to bury the body of dead people, killed in cold blood close to it.

Everything can be a host for any spirit, as long as you have the right incantation and channel Energy into it.

Demons (fallen watchers) are roaming everywhere. every dead body that died in cold blood take the form of a demons roaming the earth and can’t find rest until they are deposited or channeled into something.

Not everybody can be able to do this sort of invoking / incantation, many are chosen and born with mystically knowledge, power and spirits guarding them, it is rather foolish to believe that a tree has power or an idol has power.

Please desist from idolatry it will only increase your sorrow, something that  have eyes but can’t see, ears but can’t hear, nose but can’t breath, legs but can’t walk will one day work agains’t the invoker or the worshipper. Trust in God, Believe in God, Serve God.

Worshipping idol is the cause of the destruction that has befallen humanity, because in attempt of pleasing this insatiable demi-god, which leads to spiritual blindness, ignorance, greediness, sexually immorality.

The creation of an idol or worship of an idol is believing a lie, and lie is blindness which will only bring pain, sorrow and death.

You can’t control what you didn’t create only God can, it might answer and perform some ill miracle or give you wealth, fertility and others but one way or the other its taking something much more powerful from you, which is your soul.

The soul is where the power lies, the human soul is pure but could be corrupted and possessed through the worship of idols.

What you worship or believe or trust in becomes you and you become them, trees, idol, witch craft, doesn’t have a soul, which means zero peace.

GOD IS REAL, JESUS IS THE WAY TO GOD AND HE IS CALLING YOU TODAY ..