Pop Smoke murder investigation just led to arrest of 5 people in connection to the rappers murder.

Reports have it that LAPD served multiple search warrants around Los Angeles early Thursday morning, and 5 people were arrested on warrants in connection to the rapper’s murder.

Walker and Rogers were booked for murder Thursday morning while Murphy’s facing an attempted murder charge. Their bail’s set at $1 million each. Info on the 2 juvenile suspects has not been released.

Police say members of a Los Angeles  street gang were involved in Pop’s murder, as well as the murder of 18-year-old Kamryn Stone, who was killed in a Rose Bowl parking lot in Pasadena on September 14, 2019.

As a result, the LAPD teamed up with Pasadena PD on its investigations.

Pop Smoke ’20’ was shot and killed by 4 masked gunmen back in February in what appeared to be a home invasion robbery at a rental pad in the Hollywood Hills. 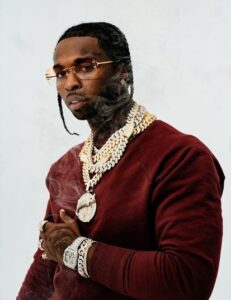 The arrests come a week after Pop Smoke’s debut album was released.

“He was definitely destined for great things,” fan Malluchi Boateng said on the day Shoot For The Stars Aim For The Moon was released.

If you look at what he did in about 14 months of his career, most artists do that in five or six yearsPop Smoke Fan
los angelesPop SmokePop Smoke AlbumPop Smoke MurderShoot for the stars aim for the moon