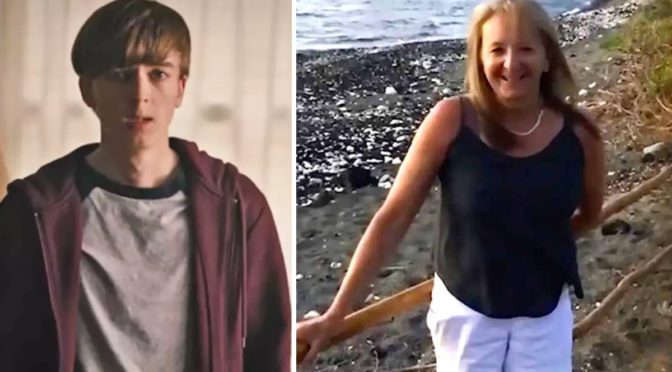 Ryan Grantham, the former “Riverdale” actor who was sentenced to life in prison for killing his mother, Barbara Waite, is “gravely concerned” about his living conditions if he’s forced to serve his time at a maximum security facility.

The 24-year-old was given the sentence last week by a Canada Supreme Court, six months after he pleaded guilty to the killing of Waite in 2020.

His lawyer, Chris Johnson, has since spoken out about his client’s fears of being put in a prison where he’s bound to be a target, considering he only weighs about 100 lbs and stands 5’2” tall.

Johnson hopes that the correctional authorities will be lenient when it comes to where Grantham is expected to serve out his life-long sentence and hopes that they’ll take into consideration the convicted felon’s height and size to prevent him from being attacked by potential intimidating inmates.

Where is #RyanGrantham mugshots? This guy was found guilty of killing his mother. The media is responsible for this craziness. Mugshots of dead blk or brown people along w/ their arrest record would blasted across all social media

If he’s placed in a max security prison, Johnson believes Grantham may be “physically, psychologically and sexually intimidated,” and in most cases, the correctional authorities could consider those factors as a valid reason to place him in a less terrorizing facility.

A judge previously agreed with the concerns pertaining to where Grantham will serve his time, but the final say is always left to be made by prison officials.

Grantham played Jefferey Augustine in the US teen drama and will not be eligible for parole for 14 years, the news publication reported last week, following the ruling. The disgraced star is said to have shot his mother in the back of the head while she was playing piano in their house in Squamish, Vancouver.

Grantham had apparently planned to kill his mom for at least a few days, and when he took her life, he recorded a video of himself confessing to the murder while her lifeless body lay nearby.

So if you ever watched Supernatural there was a kid early on who got superpowers and would scream KNEEL BEFORE TODD, which was funny. Well that kid is named Ryan Grantham he just got sentenced to life in prison for killing his mom and for trying to kill Justin Trudeau.

Read also:Cincinnati Woman Charged With Involuntary Manslaughter After Her Baby Died From ‘Co-Sleeping’ With Mom

Prosecutors said that on the following day, he planned to take a trip to Canadian politician Justine Trudeau’s home in the hopes of killing him, too, but his plans were diverted as he later decided to drive to the Vancouver police headquarters to turn himself in and confess to the crime he committed at his home.

At a previous hearing, Grantham showed remorse for his actions, saying, “I cannot explain or justify my actions. I have no excuse. It hurts me to think about how badly I’ve wasted my life,” as he called his mother a “caring and compassionate” woman who didn’t deserve to die.