SHOCKING : A Mum Dream Home in Isle of Sheppey fell off a cliff overnight

Emma Tullett is a mother to five children and her dream home fell off a cliff overnight.

She was with her children and her partner John when the roller blind on the window behind her clattered to the floor and seconds later, she heard “crackling”.

Within seconds, cracks appeared around the hallway of their five-bedroom coastal bungalow.

And as her partner John looked out of the window, he realised the fence running along the clifftop around 18 feet from their home on the Isle of Sheppey, Kent had disappeared.

READ ALSO | PHOTO: The Aghori cult who live in cemeteries, use dead bodies as alters and eat human flesh

Emma told the Daily Mail: “That’s when he said we needed to get out of there – now.”

As the family fled with Jack Russell Lola, they noticed a “chunk of cliff” had disappeared.

Emma said– “I was absolutely in a blind panic,”

“It felt as if it all happened so quickly.”

She said it “sounded like the house was starting to fall apart at the underground layer”, but added: “At that point, I didn’t think that could really happen.” 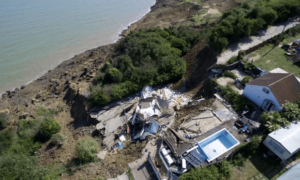 she added “I kept thinking, you can’t just lose a whole house off a cliff,”

The Sun Reports | But over the course of several days, the land beneath the home collapsed entirely and finally entirely gave way – leaving Emma and her family with just the clothes they had on when they fled.

The heartbroken mum-of-five, bought the property, which was named Cliffhanger, in August 2018, had not got insurance as it was labelled too close to the cliff face.

She said she has “lost everything” and was pictured with her head in her hands as she gazed at the damage.

“It’s heartbreaking. I’ve never cried this much,” she said.

“It’s not something you expect to happen.

“It’s like something from a war zone – something that’s happened in another country, to someone else.

“If your house catches fire, they put it out and it’s done.

Emma, 42, John, 29, their two children, Alexa, seven, and Harry, six, and Emma’s daughter Rebecca, 17, and son Owen, 15, from her previous marriage are living in temporary accommodation in Sittingbourne.

Council workers have brought toothbrushes, while Red Cross volunteers have provided food parcels and friends have given clothes and crockery.

Emma, an assistant manager for the Co-op, says she’s sleeping just two hours a night and can barely eat.

“I must have lost weight – but it’s hard to tell because I’m wearing other people’s clothes,” she said.

She and John knew the house was on an eroding soft-clay cliff when they bought it for cash in August 2018.

They were unable to get a mortgage because of its position, and they didn’t undertake a survey or have buildings insurance.

she added — “People who don’t know the area say, ‘You bought a house on the edge of a cliff and get surprised when it fell off’,”

MORE PHOTOS OF SHOCKING : Dream Home fell off a Cliff. 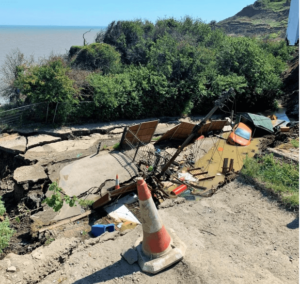 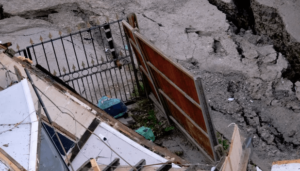 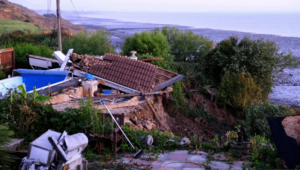 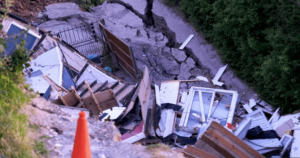 […] Elderly man in Buffalo — Martin Gugino … was shoved to the ground by an aggressive cop denies any ties to Antifa.. after President Trump suggested he was a member in a tweet he shared online. […]

[…] Legit source reveals that James DeMarco is one of the men seen in video mocking Floyd’s death as protesters marched past him in Franklin Township, NJ … and he’s been suspended from work pending a company investigation. […]