The Sri Lankan government on Sunday lifted the ban it had imposed on social media platforms such as WhatsApp, Twitter, Facebook and Instagram after declaring a nationwide public emergency and effecting a 36-hour curfew ahead of a planned anti-government rally over the worst economic crisis in the island nation.

The move was aimed at preventing masses from gathering in Colombo to protest the government’s failure to provide relief to the public suffering from shortages of food, essentials, fuel and medicine amidst hours-long power cuts, the Colombo Page newspaper reported. 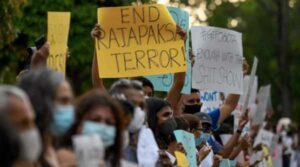 NetBlocks, a watchdog organisation that monitors cybersecurity and the governance of the Internet, had confirmed the restriction of multiple social media platforms including Facebook, Twitter, WhatsApp, Viber and YouTube in Sri Lanka after midnight on Sunday.

Earlier, NetBlocks tracked a significant decline in connectivity levels on internet provider Dialog from March 29, coinciding with the onset of the protests.

The island nation braced for country-wide protests on Sunday against the government’s poor handling of the ongoing economic crisis where people currently endure long hours of power outages and scarcity of essentials.

The imposition of curfew would prevent citizens from holding protests.

The government also imposed a 36-hour curfew with effect from 6 pm Saturday to 6 am Monday (April 4).

A Sri Lankan man on Saturday alleged that his son, who is a social media activist, has been abducted by the police.

Anurudda Bandara’s father said his son was taken away by someone from the north Colombo police station of Modera on Friday night.

According to the police, he was wanted to be questioned over his social media activities. On Sunday, he was released on bail.

Sri Lanka is currently experiencing its worst economic crisis in history. With long lines for fuel, cooking gas, essentials in short supply and long hours of power cuts the public has been suffering for weeks.