The Ex-Atlanta cop who shot Rayshard Brooks in the back and killed him has now been charged with felony murder, and his cop’s partner has agreed to testify against him.

Howard made particular notice that Rolfe kicked Brooks while he lay dying. he does not believe Rolfe feared for his life in any way, shape or form. 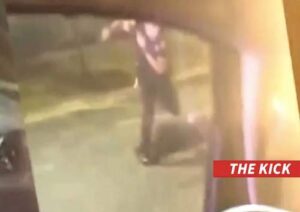 Paul Howard noted Brooks had been cordial, cooperative and calm for more than 41 minutes. The D.A. said Rolfe was not motivated by fear but rather “another type of emotion.”

Howard didn’t specifically say which emotion, but did say you can hear Rolfe right after he shot Brooks say, “I got him.”

He could face more than 20 years in prison, but it’s almost certain he’ll get way less for cooperating.

Video of the incident shows Brooks was shot by Rolfe during a chase in a Wendy’s parking lot after Brooks had obtained one of the officer’s Tasers and was attempting to flee arrest following a failed breathalyzer test.

Howard said his office talked to multiple witnesses and reviewed a number of videos and other physical evidence before reaching the decision to charge them.

Brosnan was released on a $50,000 bond after being arrested for a while and no bond at all for Rolfe who recently turned him self in. Rolfe was moved to Gwinnett County jail .

He is scheduled to appear in a Fulton County Magistrate Court at noon Friday. It’s unclear if he will be transferred to court to make an in-person appearance or if it will be via video conference.

The Ex- Atlanta cop Garrette Rolfe who recently killed Rayshard Brooks was involved in another controversial police shooting in 2015 — a case that a local judge found so troubling, she’s still bothered by it to this day.

Louisiana AquaMan Swims with Fishes in Bass Pro Shop’s Aquarium, Cops are Fishing for Him

Bikini Hero : A Nude Sunbather saves a Family of Three from Drowning in a Riptide in Pedn Vounder