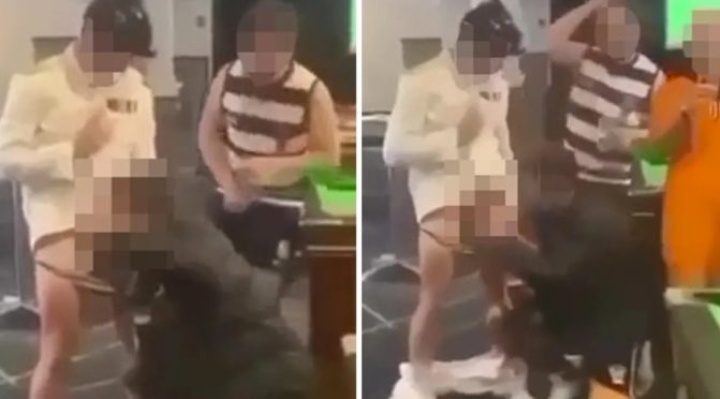 The wife of the Australian soccer player is making headlines after being recorded performing oral sex on his teammate has reportedly left him, according to a report.

The teammates, who play for Glen Waverley Football Club in Melbourne, were said to have been heavily intoxicated, and made a bet, with the loser being required to perform oral sex on the winner.

The wild moment occurred on August 14 after the football club had played their final match of the season, as one of the men then proceeds with the sex act before raising his hand while onlookers cheered him on.

Radar Online reports that the wife of the player who was giving his teammate oral sex has since left him, a move that was most likely prompted by the video gaining wide attention on social media.

According to multiple reports, the footy competitors — who play for Glen Waverley Football Club in Melbourne — made a bet during a day of heavy drinking on Aug. 14, requiring the loser to perform oral sex on the winner. https://t.co/riWb84VsQd pic.twitter.com/oJDNDHHqQs

Meanwhile, the Glen Waverley Football Club have since responded, saying they would be taking “immediate action” to address the players and their “serious breach of our culture and values that have occurred within this incident.”

They went on to state, “The individuals involved, along with the broader playing group will be both disciplined & educated and if need be, counseled in the type of conduct expected by members of our Club, along with the physical & emotional impact this has had on the families involved, club members, players, and the wider community.”

“There is no further comment at this time, and we request that the wellbeing of those be respected as they deal with the impact from the incident.”

Aside from the graphic sex act, it’s said that the players were so drunk during their outing that they were also misbehaving towards the staff members who were serving them drinks.

“The patron saw players smashing glassware inside and outside the venue, vaping indoors, dancing on tables, and trying to grab wine from behind the bar,” per The Herald Sun. “The witness said toilets were left in a state of disrepair and covered in vomit.”

The team finished their soccer season in last place having only recorded three wins.

The players themselves have yet to speak out about the incident.

Lovely photos of actress, Tonto Dikeh, and her new man, Prince Kpokpogri, at his birthday party