WORLD WAR 3 has been trending on twitter, after at least three Indian soldiers, including a senior army officer, have been killed in a confrontation with Chinese troops along their disputed frontier high in the Himalayas.

Standard reports  the incident is the first confrontation between the two Asian countries in which soldiers have died since 1975, and happened after a month-long face off between forces on both sides.

Recently (weeks) Indian and Chinese soldiers, who do not typically carry weapons in the region to avoid escalating conflicts, have fought and detained each other, and deployed forces and equipment in the western Himalayas.

A statement made by the Indian army said a “violent face-off” took place in Galwan valley in the Ladakh region – one of the four clash points in the area – on Monday night, and there were “casualties on both sides”.

DETAILS OF “THE VIOLENT FACE OFF” | WORLD WAR 3

Chinese forces have not yet confirmed the number of casualties on their side, but Hu Xijin, the editor-in-chief of China’s state-run Global Times newspaper, stated on Twitter: “Based on what I know, Chinese side also suffered casualties in the Galwan Valley physical clash.”

Based on what I know, Chinese side also suffered casualties in the Galwan Valley physical clash. I want to tell the Indian side, don’t be arrogant and misread China’s restraint as being weak. China doesn’t want to have a clash with India, but we don’t fear it.

The deaths signify the first loss of life in the border area in at least 45 years, and a statement from the Indian army said: “The loss of lives on the Indian side includes an officer and two soldiers.

Senior military officials of the two sides are currently meeting at the venue to defuse the situation.”

It is believed ammunition was not used in the conflict, with the fatalities a result of a physical battle.

Thousands of soldiers from the two countries, backed by armoured trucks and artillery, have been facing off just a few hundred yards apart for more than a month in the Ladakh region near Tibet.

China has accused Indian forces along their Himalayan border of carrying out “provocative attacks” on its troops, leading to “serious physical conflicts” between both sides. 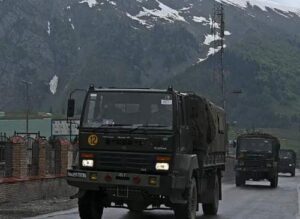 Foreign ministry spokesman Zhao Lijian said China had strongly protested against the incident while still being committed to maintaining “peace and tranquillity” along the disputed and heavily militarized border.

Mr Zhao added: “But what is shocking is that on June 15, the Indian troops seriously violated the consensus of the two sides, crossed the border illegally twice and carried out provocative attacks on Chinese personnel, resulting in serious physical conflicts between the two border forces.”

Tensions between the two neighbouring countries are the worst they’ve been since 2017, when both sides increased their military deployments at their borders with Bhutan in the Doklam crisis.

There is renewed conflict now due to the disputed Kashmir region; on 5 May Indian officials claimed Chinese soldiers crossed into Indian territory at three points, and constructed tents and guard posts, with defense analysts believing China accrued approximately 60 sq km of land during this time.

However, China has frequently opposed the building of a strategic road on the Indian side, to link the region to an airstrip nearby to China.

India and China fought a border war in 1962 which also spilled into Ladakh. The two countries have been trying to settle their border dispute since the early 1990s, without success.

Since then, soldiers from the two sides have frequently faced off along the long frontier that stretches from Ladakh in the north to the Indian state of Sikkim in the north-east.

The Indian army statement said the “violent face-off” occurred “during the de-escalation process underway in the Galwan Valley.

2 thoughts on “War Tension between China and India Explained : #worldwar3”